In 2002, the Center for Nursing Research and Quality Outcomes (CNRQO) was established within the Department of Nursing to promote quality patient care and patient-centered outcomes. The CNRQO provides full-time, on-site scholarly support for all nursing staff to integrate scientific evidence and research into their nursing practice. The success of this hospital-based service was expanded in 2009 to include support to a diverse group of health care professionals, such as physical therapists, speech and language pathologists, dietitians and other clinicians. Today, the CNRQO fosters a culture of evidence-based practice at Maine Medical Center by supporting Patient Care Services staff with all aspects of their research studies and quality improvement projects.

The core mission of the CNRQO is to promote excellence in clinical care and improvement of patient outcomes through the generation of new scientific knowledge and the translation, synthesis, and implementation of existing evidence into practice. We are dedicated to improvements in evidence-based patient care and professional practice through the advancement of the art and science of Nursing. We aim to:

The CNRQO also provides consultative services on evidence-based practice, quantitative and qualitative research and other topics to a variety of institutions across the country and are available upon request. The CNRQO regularly celebrates the outstanding scholarly work accomplished by Patient Care Services clinicians through the:

(1) Evidence: the strength and nature of the evidence as perceived by multiple stakeholders (Rycroft-Malone et al., 2004)

(2) Context: the quality of the context or environment in which the research is implemented (Kitson et al., 1998)

(3) Facilitation: the process of helping and enabling the implementation of evidence into practice (Harvey et al., 2002)

The CoMET© provides a framework to guide implementation of evidence-based practice initiatives to improve healthcare outcomes. The CoMET©  defines a standardized process for reviewing, communicating, implementing & monitoring the outcomes of evidence-based patient care policies, practice guidelines and standards of care. When used by the Practice, Research, & Quality Councils, their collaborative efforts determine the strength of the evidence, education content, and the implementation and facilitation process for a practice initiative with the goal of improving practice uptake, sustainability and improving outcomes.

By using CoMET© and following its standardized processes, practice initiatives are more likely to be sustainable, leading to less variation in practice and improved outcomes.

Getting evidence into practice: the role and function of facilitation. Journal of Advanced Nursing, 37(6), 577-588.

The Center for Nursing Research and Quality Outcomes supports the internal and external dissemination of evidence-based practice and quality improvement projects, research studies and other scholarly manuscripts. Our publications and scholarly papers are currently available at MaineHealth Knowledge Connections.

The Center for Nursing Research and Quality Outcomes provides consultation and assistance to clinical staff for evidence-based practice, quality improvement and research projects. This includes: development of clinically important questions, crystallization of project/study designs, Institutional Review Board (IRB) proposal and application writing, implementation of project/research plans, data collection, data entry and analysis, interpretation and utilization of the findings and extensive support for the dissemination at inter-professional conferences and publication in peer-reviewed journals, as well as internal reporting mechanisms.

The Abstract Book is a biennial publication showcasing MMC clinicians’ evidence-based practice, quality improvement and research projects in abstract format. It highlights the continued commitment of MMC clinical staff to a culture of evidence-based practice. Abstracts are authored by bedside nurses and other front-line clinicians for conference presentations. Many of the abstracts are based on nurse-led and clinician-driven projects and reflect a robust culture of inquiry at MMC. Nurses and other healthcare colleagues are supported and empowered to ask important clinical questions, seek evidence-based answers, and share their findings within the MMC family and outside the organization at many professional local, regional and national conferences.

The Qualitative Research Interest Group (QRIG) is one of six interprofessional research-focused groups that were formed in 2014 to promote collegiality and learning among clinicians and researchers at MMC.

Through a partnership between the Center for Nursing Research and Quality Outcomes and the Center for Outcomes Research and Evaluation (CORE), members discuss topics of interest related to qualitative research methods. The group meets every two months (January, March, May, July, September and November). This group is open to the public. Please contact Kristiina Hyrkas, RN, MNSc, LicNSc, PhD for more information.

Participants may choose to enroll in either the EBP or both the EBP/CSP classes which are offered once each year. The Center for Nursing Research and Quality Outcomes in collaboration with interprofessional experts in the field of EBP present the five workshops between February and May. Scholars who elect to complete an EBP, QI or research project as part of the CSP will develop a clinical question, collect and analyze data, and present their results in October. Experienced mentors are assigned to support each CSP participant.

Dr. Hyrkas graduated in 1982 and specialized in surgical nursing in 1984. She worked as a staff nurse in the Intensive Care Unit of Turku University Hospital and in the ER of Loimaa District Hospital from 1982-1987. She began teaching in 1988 at Pirkanmaa College of Nursing and also became a full time lecturer. Dr. Hyrkas completed her Master's degree in 1992; her Licentiate Degree (a post-graduate degree in the Finnish education system. The credits required for this degree are equal to a Doctor of Nursing Practice [DNP] degree) in 1997 and her Doctoral Degree in 2002. Her academic teaching career started in 1994 at the University of Tampere. She worked first as a Planning Officer, and after that as a Senior Lecturer and Senior Assistant Professor in the Department of Nursing Science. During 1997 to 2002 she worked as a full time researcher at the University of Tampere, Department of Nursing Science.

In 2002, she moved to Canada and started to work as an Assistant Professor at the University of Alberta, Faculty of Nursing. Later on she became an Associate Professor at the University of Northern British Columbia. The focuses of her research projects are (a) quality and quality related issues in health care, (b) patient satisfaction, (c) clinical supervision, (d) teaching and learning nursing. Methodological expertise: Dr. Hyrkas has applied both quantitative and qualitative methods in her studies and triangulation. She has applied action research -approach in many of the research projects in clinical settings. Dr. Hyrkas reviews manuscripts for twelve academic journals. She has published several articles, chapters and three books and has written her publications in English and Finnish. She is also an Adjunct Professor at the University of Southern Maine School of Nursing.

The STTI Honor Society of Nursing is the second-largest nursing organization in the world with approximately 135,000 active members in more than 90 countries and territories. The 431 chapters are located on 515 college and university campuses.

We received the STTI’s Chapter Key Award in 2019 and this was recognized at the Sigma’s Biennium Conference in Washington, DC. November 2019. The Chapter Key Award, established in 1991, honors Sigma chapters that excel in chapter-related activities such as: 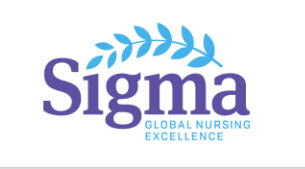