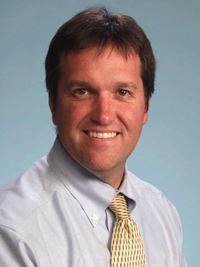 National news stories have drawn attention to the shorter course of radiation therapy now recommended for many women with early stage breast cancer, but not widely practiced.

Listen in as Ian Bristol, MD explains that earlier trials confirmed that treatment can be safely and effectively delivered in 3-4 weeks, resulting in increased convenience for the patient, decreased cost to the health care system and, therefore, increased value of services provided.

Download podcast (.mp3)
Melanie Cole (Host): For women with early stage breast cancer, shorter courses of radiation therapy at higher doses may be less toxic and lead to a better quality of life than a longer course at lower doses. My guest today is Dr. Ian Bristol. He’s a radiation oncologist with Maine Medical Center. Welcome to the show, Dr. Bristol. I’d like to start by asking you, what is breast conserving surgery?

Dr. Ian Bristol (Guest): So, breast conserving surgery is a technique that arose several decades ago for patients who have early stage breast cancer. The technique replaced, or is another option for patients with that disease as opposed to mastectomy. Mastectomy was historically the treatment of choice for early stage breast cancer and that would be a surgical procedure where the entire breast is removed. Over time, however, the medical community started to ask the question, “Can we provide patients with still an optimal outcome in terms of management of their cancer but leave patients whole?” In other words, do surgery that left the breast intact. So, with breast conserving surgery, what the surgeons are doing is that they’re going into the breast and they are removing the tumor itself with a margin around the tumor but leaving the breast in and of itself intact.

Melanie: So, then what are the benefits of radiotherapy after breast conserving surgery?

Dr. Bristol: So, when we first started to ask the question of whether or not breast conserving surgery would provide optimal outcomes for patients in terms of management of the cancer, and we looked at the outcomes comparing women who had had a mastectomy versus a lumpectomy or breast conserving surgery alone what we found is that if you perform only a lumpectomy, those patients had a much higher risk that the tumor would recur within the breast as compared with what one would expect with a mastectomy. We then looked at a third group of women and that third group of women had breast conserving surgery or lumpectomy and then we followed that surgical treatment by giving them a course of what we call “whole breast radiation”. And what we found is that when we analyzed the outcomes for those patients who had had lumpectomy plus radiation, we found that the radiation significantly reduced the chances that the cancer would come back within the breast to numbers much more comparable to what one would expect with a mastectomy and when you compared the outcomes of lumpectomy alone versus lumpectomy plus radiation, not only did the radiation reduce the chances that the cancer would come back within the breast, but that also translated into a significant survival benefit for patients such that what has arisen as the standard of care for patients now with early stage breast cancer is either to have a mastectomy without radiation or to have a lumpectomy followed by a course of whole breast radiation. The two options are considered equivalent in terms of outcome.

Melanie: What is fractionation?

Dr. Bristol: So, fractionation is a process whereby we divide the total dose of radiation that is given to a patient into a small amount of radiation that is given each day. Where typically the treatment would be given once a day, Monday through Friday and that is given over an interval of time to get to a total accumulative dose of radiation. There are many reasons that one would fractionate in terms of cancer biology, but one of the most important reasons to fractionate is to not only cure the cancer but to do it in the manner that doesn’t create a tremendous amount of harm to the patient.

Melanie: So, then, what are the benefits of hypofractionated WBI?

Dr. Bristol: So, if we were to look back historically again at the role of radiation in the setting of breast cancer management in general, when we first started to look at the role of radiation, the typical course of radiation in such patients would have been given over the course of five and a half to six and a half weeks, where each patient would get one fraction every day Monday through Friday over that interval of time. Now, as time has evolved, so has our technology and as our technology has evolved, our ability to deliver the radiation treatment is much better. So, as we’ve evolved over time, we’ve begun to ask the question, can we give the radiation by giving it at a higher dose each day to a lower total dose and as such, reduce the overall treatment length to patients. So, what you’re asking me is: what’s the difference between the old standard radiations of five and a half to six and a half weeks versus what we could call “hypofractionated” radiation therapy? Again, hypofractionated radiation means that we give a little bit more radiation each day to a lower total dose done over a shorter period of time. The first question is, is the outcome comparing standard radiation versus hypofractionated radiation, is the outcome from a cancer perspective expected to be the same? There are now at least three randomized control trials that have asked that very question and the outcome of those randomized, controlled trials has shown that the outcome from a cancer perspective is equivalent between standard fractionation versus the shorter course of radiation. Moreover, the concern with doing more radiation each day over a shorter period of time would be placing patients at somewhat higher risk for having complications or side effects from the radiation but with our newer technologies and techniques, when we actually followed those patients over time comparing standard fractionation versus hypofractionation, it turns out that the patients who get hypofractionation have the same side effect profile as the standard radiation fractionation. So, the outcomes effectively from a cancer perspective and a toxicity perspective, are the same. So, the benefit is on several levels. The benefit to the patient is that instead of coming back and forth to a center for five and a half to six and a half weeks, they only have to come for three to four weeks. So, there’s major cost savings to the patient’s emotional improvements, so on and so forth. To the system in general, to the healthcare system, you can imagine, also, that if we can truncate the radiation treatment from five and a half to six and a half weeks down to three to four weeks, there’s also cost savings to the system there. What it translates into is equivalent quality care at a lower cost to everybody involved which improves the value of the treatment overall.

Melanie: Why would some women not get this treatment?

Dr. Bristol: This treatment is currently offered and we’ve run trials and looked at the outcomes for patients who would have early stage breast cancer--that would be patients who have lymph node negative breast cancer. In addition, we have not done trials looking at patients who require chemotherapy who have gotten chemotherapy before they have surgery. We don’t offer the treatment to them. And, there are some patients for whom the treatment would potentially have slightly higher risk and that would be due to individual anatomy of the patient. So, the way that the radiation beams enter and penetrate through tissue, if there is an excessive distance of separation within the breast itself, one might predict that there could be hot spots from the radiation, and that you wouldn’t want to do the short course radiation. Having said that, the majority of patients who present with early stage breast cancer are candidates for the hypofractionated approach.

Dr. Bristol: From the radiation?

Dr. Bristol: So, what happens for the patient is they come to see us, we do a consult and if we determine that radiation is appropriate. We get that set up through what’s called a “simulation” and then the patient will start therapy. Again, the treatment’s given once a day, Monday through Friday and with the hypofractionated course, it’s going to last for about three to four weeks depending upon the circumstance. On a daily basis, what happens is the patient comes to one of our centers. They will change. They will be brought back into the treatment room, put on the table, lined up appropriately, and once they’re aligned, they will receive the treatment. The radiation itself does not hurt at all. You don’t feel it. You don’t smell it. You don’t see it, nothing of that nature. It’s not hot, nothing like that. It’s just like getting a chest x-ray. So, initially, patients will come in and get treated and they’ll leave and they won’t realize anything actually happened. That holds true for about the first two to three weeks of therapy and once patients get into the second to third week, they do start to get some side effects from the radiation. Typically, the side effects for the management of breast cancer have to do with side effects to the skin. So, it’s relatively common for patients to start to get a little bit of irritation to the skin over the breast. If often looks and feels to the patient like they’re getting a bit of sunburn. They’ll get that and a little bit of fatigue from the treatment. It tends to be relatively mild. Most women are able to maintain all of their normal activities of daily living including working, exercising, all of the above. The symptoms from treatment will then persist for a couple of weeks after we finish and then what happens is the red irritated skin fades to a tan, the fatigue gets better and usually by about four to six weeks later, most patients feel fine. So, it’s generally a very, very well-tolerated treatment for most patients.

Melanie: And, doctor, tell us why they should come to Maine Medical Center for their care?

Dr. Bristol: I think Maine Medical Center offers a number of great advantages. One of the best advantages of Maine Medical Center is one, we have fellow-trained surgical oncologists, so the start of a patient’s journey with breast cancer would start with seeing a fellow-trained breast surgeon who specializes in the surgical management specifically of breast cancer. That’s where they’re going to start. Then, all patients who come into the center are going to be presented in our multi-disciplinary tumor board. That’s a tumor board where doctors of all different aspects of care such as surgical oncology, radiation oncology, medical oncology, pathology, radiology, in cooperation and in conjunction with all of our nurse practitioners, all of our social workers, our geneticists, we all come together and we discuss every patient’s case individually, going over the nuances of each patient’s case and then, as a group, deciding what we think is the most appropriate management given the situation on hand. From there, the patients are then set up to see the specialists that are appropriate and necessary in their management. All of us as a community and as a group are working together for the benefit of each individual patient.

Melanie: Thank you so much, Dr. Bristol. It’s really great information. Thanks for being with us today. You’re listening to MMC Radio. And for more information you can go to www.MMC.org. That’s www.MMC.org. This is Melanie Cole. Thanks so much for listening.