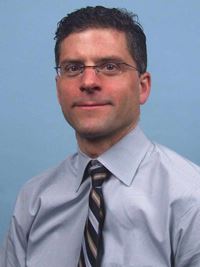 "Convergent Maze” is a new procedure for patients who suffer from chronic atrial fibrillation, or a-fib, an irregular heartbeat also called arrhythmia.

Listen to Dr. Andrew Corsello as he talks about this new procedure, performed in Maine only at Maine Medical Center, that is less invasive than standard surgical treatment and gets patients home sooner.

Download podcast (.mp3)
Melanie Cole (Host): Convergent Maze is a new procedure that treats patients who suffer from atrial fibrillation. Might this procedure be right for you? My guest today is Dr. Andrew Corsello. He’s a fellowship trained electrophysiologist and Medical Director of the Electrophysiology Department at Maine Medical Center. Welcome to the show, Dr. Corsello. Tell us, first of all, what is atrial fibrillation?

Dr. Andrew Corsello (Guest): Atrial fibrillation is an abnormal heart rhythm, where the top chamber of the heart is irregular, chaotic and makes people feel unwell. It also is one of the more common treatable causes, preventable causes of stroke.

Melanie: Is there some symptoms people feel when they have atrial fibrillation?

Melanie: You mentioned stroke, Dr. Corsello, so what are some of the more imminent dangers of untreated atrial fibrillation?

Melanie: So first line of defense is blood thinners, anticoagulants, medications. Then there are some new procedures out there to help treat a-fib. Tell us about them.

Dr. Corsello: There are a number of different procedures because the medications to control the atrial fibrillation are not great. We haven't had any great medications. We haven't had any developments, really, over a dozen years. Even the best medications work about two-thirds of the time. In some types of atrial fibrillation, they barely work. They have a lot of risks, too. So, because those meds are not great, a number of developments occurred. First was a procedure called a surgical maze, where the surgeon would open up the heart and quite literally cut it up into little pieces and put it back together. It worked pretty well but it was a hard procedure performed and it was very hard on patients, and it never completely caught on. So starting about 16 years ago, there was the procedure called a catheter ablation that became available. That works very well for certain types of atrial fibrillation, especially young healthy people without many medical condition who have a pattern of a-fib with their in and out, and if they fail medication, this catheter ablation can make people feel much better. It’s not perfect, but sometimes people still need meds reviews and second procedure, but it can’t work very well. One of the things we’re going to talk about today is that procedure does not work well in people who have been stuck in a-fib, people who were in it consistently for a year or two and have failed medication, failed other procedures, and that’s where the idea of the convergent maze came up.

Melanie: Who is a candidate for the convergent maze procedure?

Dr. Corsello: It’s either patients who have symptomatic atrial fibrillation or in some ways compromised by their a-fib, who have failed an attempt at medications or can't get meds for various reasons: kidney disease, lung disease, et cetera. Then they could be a candidate if they have the pattern of atrial fibrillation where they are stuck in it and we can't seem to get them out of atrial fibrillation. Most of the patients have been in it more than a year or two, and those are the patients where further attempt at meds and catheter ablation do not work very well. I’ll say, as an example, a catheter ablation for that kind of a-fib works in less than a third of patients and could get to the point of maybe not being worth the risk. That’s where convergent maze comes in.

Melanie: What are the advantages of convergent maze procedure?

Dr. Corsello: Convergent maze is a much more aggressive ablative technology. ablation simply means to scar up the diseased area, and most of the time, it’s with burning. But the advantages are it is a much more aggressive procedure. It combines what the surgeon can do very well with what the catheter can do very well. And just because of the way we’re built, because of our anatomy, there are some things that the surgeons can approach much better than the catheter and there are some areas that the surgeon can't reach unless he does a full open heart surgery. That’s where the idea of converging it—it’s just like the English word—it’s the surgical field and the catheter field converging together and doing the best of each technique. So in the convergent maze, instead of doing an open heart surgery, the surgeon makes a one-inch incision just at the top of the belly and gets all the areas they can get to readily and ablates them aggressively, and then we come up from the groin with a catheter and ablate all the areas it can't reach. As I mentioned, if the surgeon had to do that before the convergent maze, he would have to crack the chest or go spread the ribs, drop off of the lung to do a much more extensive surgery with a much harder recovery. By simply leaving out or skipping the areas he can't get to from under the belly and letting the catheter take care of that, it is a much better recovery and has probably about the same success rate.

Melanie: Dr. Corsello, tell us a little bit about the procedure. Is this an in-patient or an outpatient and what is the recovery like?

Dr. Corsello: Expected stay in the hospital is on the order of about three days. The patient will come in the first day and go out onto general anesthesia and have two portions, either in the same room or in two different rooms where, as I mentioned, the surgeon will ablate an area and then the catheter ablate. Then they’ll come to an intensive care unit, still pretty beat up for a day or two in the hospital, typically to home the third or fourth day afterwards. Then like any surgeries, they could gradually recover to themselves. So over a period of a few weeks, they’ll gradually get their energy back. If the person did a very symptomatic atrial fibrillation, they’re going to start feeling better almost right away, almost by the time they go home and the wounds have healed up.

Melanie: Does this restore normal heart rhythm permanently? Is it something that might have to be done again? What about the medications that they were on prior to this procedure?

Dr. Corsello: They will stay on all of their medications for at least few months just to help the heart recover from the entire procedure. At this point, we have scientific information out to a year or two and it works about three-quarters of the time, which is not perfect, but certainly a lot better than the procedures we had before like a catheter ablation. A quarter of patients will either need to stay on their medications long term or have occasional atrial fibrillation or need a second procedure of some kind to touch up the areas that were not fully ablated. One of the things we’re still struggling with is knowing exactly where to ablate in every patient, so it’s still somewhat of a “one size fits all” and some patients have a-fib coming from areas that were not ablated because they’re less common areas – areas, for example, on the right side of the heart where you won't know until after you ablate the left side that it wasn’t coming from the left, it was coming from somewhere else. So even if technically done perfectly, there are some limitations that are outstanding that prevent it from being 100% successful.

Melanie: Dr. Corsello, in the last minute or so, tell listeners why they should come to Maine Medical Center for their cardiac care.

Dr. Corsello: Well, I think we sort of achieved a place of striving for very high quality. We do this partly through high volume as well as programs that really track and constantly try to improve our quality. In general, for example, in electrophysiology, it’s an attending base, it’s a teaching hospital, but all of your care is delivered by your attending physician, which, I think, offers many benefits to a patient going through a process, a surgery that can have some ups and downs to it. And I think we’ve shown as a hospital that we can achieve a very high quality of care partly through volume, but partly just through dedication and skills.